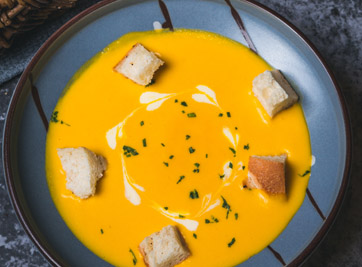 Turmeric and curcumin can be used as a color in three major forms. The color additive turmeric is the ground rhizome powder of Curcuma longa L, while turmeric oleoresin is the combination of flavor and color principles obtained from turmeric (Curcuma longa L.) by extraction using any one or a combination of  solvents and typically contains 5-55% of curcuminoids. Curcumin, the main coloring component of turmeric, is an extract containing at least 90% curcuminoids. Curcumin is obtained by solvent extraction of turmeric powder with purification of the resultant extract by crystallization. The commercial product consists essentially of curcumins: the coloring principle (1,7-bis(4-hydroxy-3- methoxyphenyl) hepta-1,6-diene-3,5-dione) and its desmethoxy and bisdesmethoxy derivatives in varying proportions. Minor amounts of oils and resins that occur naturally in turmeric may also be present.

Curcumin (INS No. 100(i)) is added to foods and beverages at concentrations up to a maximum permitted level (MPL) as adopted by the Codex Alimentarius Commission. There are currently 6 food categories for which MPLs for curcumin have been adopted in the General Standard of Food Additives, with a large number of other applications of curcumin as a color additive in foods and beverages proposed and pending adoption, following completion of the review and comment process.

USA: Turmeric (21 CFR 73.600) and Turmeric oleoresin (21 CFR 73.615) are exempt from certification and may be safely used for the coloring of foods generally, in amounts consistent with GMP

EC: ADI for curcumin of 3 mg/kg bw/day (EFSA, 2010). EFSA has also established MPLs for use of Curcumin in beverages and foodstuffs according to the European Parliament and Council Directive 94/36/EC.