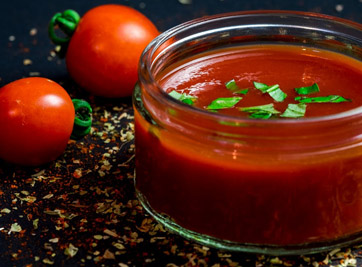 Canthaxanthin was first extracted from an edible mushroom, Cantharellus cinnabarinus, in 1950. It has since been identified in sea trout, algae, daphnia, salmon, brine shrimp, and several species of flamingo. In addition to these natural sources, canthaxanthin can be synthetically produced from acetone. Canthaxanthin crystals are insoluble in ethanol and poorly soluble in other solvents. Canthaxanthin is chemically stable at pH 2-8, and sensitive to light and oxygen. It is commercially available as a dry powder and a water-dispersible, dry beadlet composed of 10% colorant, gelatin, vegetable oil, sugar, starch, antioxidants, and preservatives.

Canthaxanthin is a reddish-orange color rarely used directly for coloring food such as tomato products, fruit drinks, sausage products and baked goods, but primarily used to color the meat of poultry, salmon, and trout and the yolks of eggs indirectly through animal feeds, as well as pharmaceuticals.

Specifications for Food Use

Canthaxanthin is added to foods and beverages at concentrations up to a maximum permitted level (MPL) as established by the Codex Alimentarius Commission and published in the General Standard of Food Additives (GSFA).

Canthaxanthin is not genotoxic by a weight of evidence analysis. Canthaxanthin is poorly absorbed from the gastrointestinal tract of animals. Once absorbed canthaxanthin is slowly eliminated from the plasma. Most canthaxanthin is transferred to fat tissue where remobilization is slow, even under conditions of rapid fat utilization. Although poorly absorbed, canthaxanthin, like other carotenoids may be cleaved by cellular dioxygenase to form two identical fragments of 4-oxoretinal. The low acute toxicity of canthaxanthin is demonstrated by an oral LD50=10,000 mg/kg in mice. Canthaxanthin was fed to 4-week-old CD-1 mice (60/sex/group) at dietary levels of 0 (control), 0 (control), 250, 500 or 1000 mg/kg bw/day for 90 weeks (males) or 98 weeks (females). No adverse effects were observed when dogs were given canthaxanthin at oral doses of 0, 50, 100 or 250 mg/kg bw/day for 52 weeks. In a three-generation reproduction study, rats received canthaxanthin via micro-encapsulated water soluble beadlets at dietary levels of 0, 0 (control), 250, 500 and 1000 mg/kg bw/day. There were no treatment-related effects on mating, gestation, parturition, lactation or the ability of the dams to successfully rear their offspring. FU-Albino rats (40/group) were given canthaxanthin at dietary doses of 0, 250, 500 or 1000 mg/kg bw/day on days 7 to 16 of pregnancy. No treatment-related effects were observed on the dams and there was no indication of embryotoxic or teratogenic effects at any dose level.