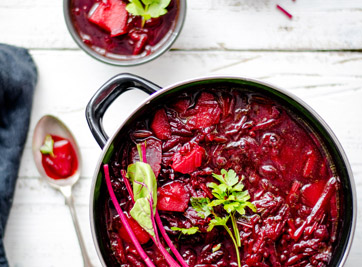 Beet Red is the color obtained from the red beetroot, the principal component of which is betanine. Beetroot red is available as a liquid, paste, or solid, depending upon the degree of processing. Beetroot Red gives a bright red to bluish red color.

Beet red is a food additive that is included in Table 3 of the General Standard for Food Additives (GSFA), and as such may be used in specified foods under the conditions of good manufacturing practices (GMP) as outlined in the Preamble of the Codex GSFA. Beet red can also be used in heat-treated butter milk of food category 01.1.1 and spices of food category 12.2.1. and is acceptable in foods conforming to the Codex Standard for Bouillons and Consommes (CS 117-1981).

EC: EFSA has concluded that beetroot red is not of safety concern as regards its current use as a food additive (EFSA, 2015). EFSA has also established MPLs for use of beetroot red in foods and beverages in Europe according to Annex II to Regulation (EC) No 1333/2008.

In a two-generation study, rats were given 50-78 mg betanine/kg b.w./day in drinking water throughout their lives. No evidence of carcinogenicity was reported (Druckrey, 1959). No increase in tumors was observed in rats given repeated doses of betanine by subcutaneous injection (Druckrey, 1959). There was no evidence that betalain preparations initiated or promoted hepatocarcinogenesis (Schwartz et al., 1983).

Beet red was found to be non-mutagenic against 5 strains of Salmonella typhimurium in the Ames test, with or without metabolic activation by S-9 preparations, at concentrations of 500-2500 µg/plate (von Elbe & Schwartz, 1981). At higher concentrations (50 mg/plate), beet red was reported to be weakly mutagenic against S. typhimurium, with or without metabolic activation (Ishidate et al., 1984). No DNA damage was detected in the E. coli rec assay (Haveland-Smith, 1981). Beet red did not induce chromosomal aberrations in Chinese hamster fibroblast cells in culture (Ishidate et al., 1984). No deaths were reported in rats given high oral doses of beetroot red (Druckrey, 1959). Single doses of betanine injected i.v. into anaesthetised rats caused a transient increase in blood pressure and heart rate, the effect of 0.9 µmole betanine being about equivalent to that of 2 µmole adrenalin (Kranz et al., 1980).

In evaluating beet red, JECFA noted that when the concentrate is used to enhance the color of beet products, it could be considered a food. If, on the other hand, the concentrate is used more generally as a colorant, careful specifications need to be established. Because nitrate is a component of beet red, it is necessary to ensure that levels of nitrate do not exceed the specifications.